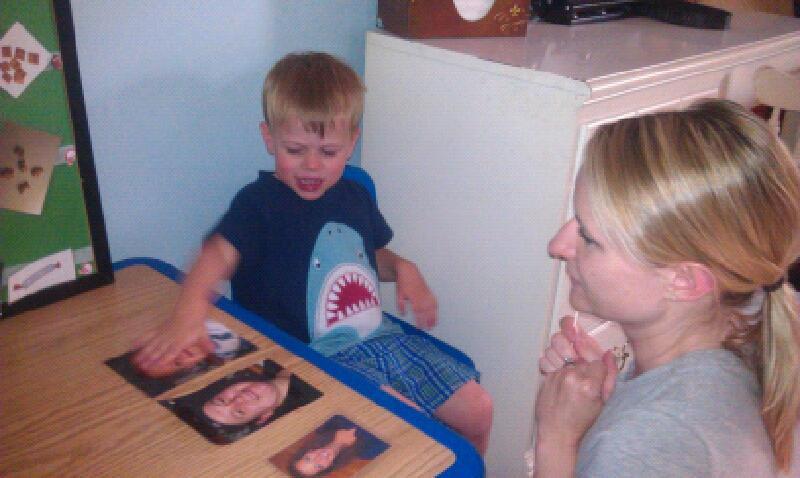 Discrete Trial Teaching (DTT), also called Discrete Trial Instruction (DTI) is one of the many teaching strategies used in ABA. DTT involves breaking a skill into smaller teachable steps. The instructor provides concentrated teaching of one step or one target at a time until the student meets criterion for that target. Repetition and consistency of teaching any given step or target is a key ingredient to help the student learn that particular target. Prompting and reinforcement would continue to be used and be two additional primary teaching tools used throughout DTT.

Basically, in DTT, the student is given a SD. SD stands for Discriminative Stimulus. This is a stimulus that signals to the student that a given response will be reinforced. A SD can be an object (i.e. handing the student a puzzle piece to insert into the puzzle), a verbal directive, a picture or other visual item (i.e. showing the student a letter that needs to be traced or a maze to complete), an action or part of a chain (i.e. in hand washing, the step of rubbing soap onto hands can act as an SD for placing hands under water), or a cue from the natural environment (i.e. raining outside can act as a SD to grab an umbrella before leaving the house). After a SD is given, the student emits a response. An individual, after a period of time, learns or discriminates that under certain conditions, engaging in a behavior or correct response to the SD will be followed by reinforcement. If the individual provides a correct response, then reinforcement is given. If the individual provides an incorrect response, the instructor would ignore the incorrect response and record the response as incorrect (the trial is over). After the incorrect trial is complete, then an error correction procedure using prompting is provided. The instructor presents the SD and provides the least intrusive prompt necessary to assist the student in emitting the correct response. The instructor would record the data for the prompted trial. Following each incorrect trial with one (or more) prompted trial(s) guarantees an environment of errorless learning, where the student is reinforced for correct responses (even when prompted), and is not subject to being incorrect on two consecutive trials. Once the student has met criterion for target one via DTT (criterion is 80% or greater for three consecutive days across two people or 0 prompts for three consecutive days across two people), then the instructor would baseline target two followed by teaching target two via DTT. To ensure the student is learning a variety of new skills and to prevent any boredom or frustration with learning a specific skill, the instructor rotates and teaches approximately 22-25 programs daily.

For many of our new learners in the Initial Steps Program, the programs taught often include receptive language, imitating language, expressive language, imitation of gross and fine motor skills, toilet training, basic cognitive tasks such as puzzles or patterns, adaptive skills such as washing hands or using utensils, joint attention, play skills and much more.

Daily, the Knapp Center staff records the child’s correct and incorrect responses throughout DTT, followed by graphing the outcomes. This data and graphs are used to drive treatment.  Decisions. Below is a sample data collection form and graph we use throughout our DTT sessions.

On this data collection form, we can see the child correctly responded to 50% of the trials at baseline. 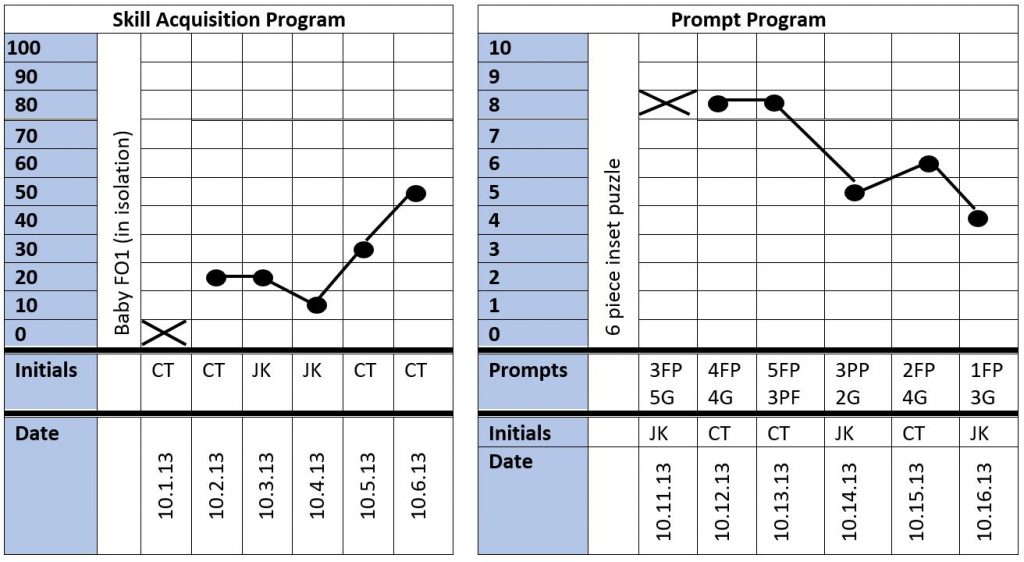